Platformer Toolkit is an interactive video essay, from the creator of Game Maker’s Toolkit.

You’ll get to see, first hand, how platformer characters are designed, as you use the toolkit to change and adjust over 30 variables that drive the hero’s movement.

Change Kit’s max speed, jump height, squash and stretch, coyote time, and more - and then play through a sample level with your chosen stats.

sfx for jumping and landing

it took me forever to try this, but i'm glad i finally did. if i were to criticize it at all i'd say that i feel it'd be more accurate to say there is a small window of where the settings are set to that would be fun with the level, but that's more of a nitpick than actual constructive criticism.

Really enjoyed this, great for anyone interested in game design.

I really love this! It's a pleasure to use. I've wanted to make something similar for our educational toolkit Gamefroot for years but we've never got around to it - as you know there's lots of moving parts!

But now that we have some inspiration (you beauty) we are porting this interface and all the variables into make.gamefroot.com. It's not currently visible or ready to show off but I just wanted to let you know that your work is inspirational and that we will be engaging the next generation of game designer with your thinking and our thinking combined.

I'd love to chat more about this if you ever have a spare moment :)

Awesome, i love it. Great job!

This is very nice.

Hey Mark, can I use this controller in my game?

Ah, this is great! I’ll have to point game jam friends to this the next time they want to make a platform game so that the world won’t be afflicted with yet another ice-skating game with floaty physics. :)

You are an invaluable resource to game designers, Mark. Thanks for this! Maybe I will try out making a platformer next.

Feel like this is missing a jump acceleration meter, so that the height of a short press can be messed with without making that of a long press gigantic. This absence is especially easy to feel with the supposed run & jump presets, Sonic's in particular.

The platforms are also weirdly finicky. The series of crates can randomly just take away all of your momentum, which gets in the way of feeling out and showcasing the points this app/game/essay tries to make. Maybe a toggle to also make the *platforms* rounded corners would've been a good idea.

There's also a weird effect to horizontal damping, where putting it at low levels feels "better", but when you run into a wall, the camera will snap back and jerk behind your character, which makes me motion sick. I couldn't find any settings combination that kept a tiny amount of it for feeling the impact of running into a wall without getting in the way of the lookahead.

I truly love the idea behind this, but I can't say the execution actually illustrates it well.

The resource is great, it will definitely help a lot of people create unique character moves! :D

Also, thank you very much for the opportunity to download the code.

I have always wanted to make a platformer and this makes it so easy to tweak values it would be nice if there is a feature where I can download the values and put them in my engine.

I'm going to have a crack at doing this for Javascript games. It might generate JSON :)

This is amazing! Thank you for making this awesome tool, Mark.

Very fun and informative, thanks Mark.

This was fun AF and surprisingly informative. Thanks for the experience!

This is incredible, thank you for making this

A have an nice idea! Make a game jam with theme like "make your game" or something like this.

Awesome game! Thank you so much for playing!

Amazing project! But the game has so many comments that it would probably be better with an itch.io discussion forum/topic structure. Right now the scrollbar is tiny due to all of the comments!

It would make suggestions for a PF-TK 2.0 much easier to organize, so I'm all for it.

It's actually kind of easy, although not really fun, to beat this with the default settings!

Any ideas on how to make similar sliders with changeable form?

Here are the settings I came with for my character movement:

I want to hear your thoughts on how my character controls work, so feel free to give your critique.

It feel pretty good, i almost finish the game without dying but without the assist (coyote time/jump buffer) sometime it was hard and feel unfair… maybe you could add them. Also, you didnt write the TurnSpeed; the default value doesnt feel good, the character seems to be on ice, but only if it’s turning… that’s feel weird. I think 20 (a little sliding) or 40 (a brief stop) would be great. For the rest it’s very good character, pleasant to play. Good work.

Amazing game. Aside from the whole "make a platformer but easy mode" thing I found this really fun to mess around with. Customizing my preferred controls was fun, especially with juice, but cranking everything to the maximum or minimum is fun too. And playing through the whole course as the platformer gods themselves is great.

Thing I thought of while playing as Madeline: a "one level, multiple characters" game would fit really well in a jam, and even one of your older jams (2019 I believe) had a amazing winner with a similar concept. Maybe "one level" could be your next jam theme! I know I would have fun playing a bunch of games in that style. I'm sure you'll think of something better in time lol but it would be cool

Excellent work!  Right now I am working with my students making VR games, but if I (or they) decide to make a 2D platformer I will be sure to send them here and try this wonderful game/essay out.

When i saw the Youtube Video i was like, meh i dont need this, but now i see the possibilitys one has. Its so amazing and i now wanna play around with movement of my players in unity more in detail.

I hope this makes me Quit Tutorials Hehe

Loved the game. It was interesting to see how my controls compared to other games.

cranked literally everything up and it was pure chaos

this is so fun

If you see this you cannot fail/die if you have the development tabs open, just to let you know. Guessing it was a bug

Nope, that's intentional! I didn't want players to have to think about challenges and traps while editing the game.

There is the issue that I can't play with modified Time scale. It is only active when toolkit is open. Is this also intentional?

side effect of not dying: you can stand on the saws in the last segment which has some really funny side effects

very good game. my sister loved it, she played it for over 20 mins playing around with controls in the toolkit. easy to understand

This is amazing. Good job! 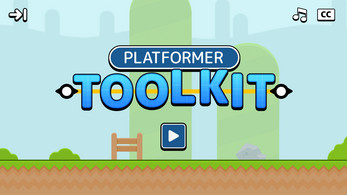 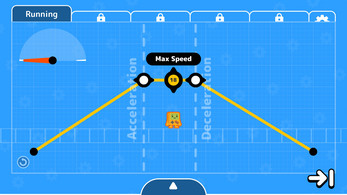 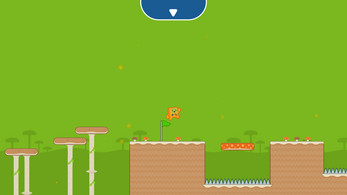 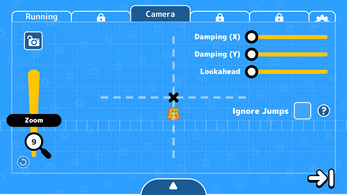